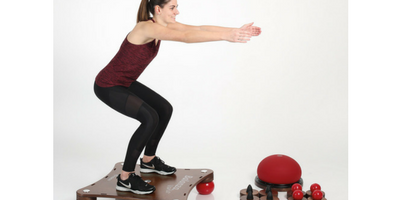 For health and fitness lovers April is a special month:
From April 12 to 15, around 700 exhibitors will present their trends at FIBO.
Visitors to TOGU can also admire two top novelties and try them out directly at the stand (Hall 7 / B71). Balanza® Vario and Jacaranda® are the trade fair highlights of the premium manufacturer of air-filled training and therapy equipment. In addition, the company from Prien am Chiemsee presents the TOGU Club.

TOGU extends the Balanza® product range. Balanza® Vario consists of a wooden plate and has interchangeable feet. It revolutionizes balancing and coordination training on dynamic documents and is more than a simple balance board. In addition to the classic, air-filled balls, smaller elements can be attached to the four corners. In addition, a large, air-filled ball can be fixed in the middle of the plate. This increases the variety of training and brings variety to the workout. Balance, coordination, strength and agility are equally trained with Balanza® Vario. The dynamic created by the floating, unstably mounted surface compensates the body continuously. Thus, the deep-lying muscle groups are activated, which are responsible for a healthy back and the stability of the body.

The 400 g Jacaranda® ball has a diameter of 14 cm and is filled with free-moving stainless steel balls inside. By training with Jacaranda® the balls are vibrated, which is transmitted to the whole body. Thus, the deep-lying muscles, especially in the abdominal and back area, stabilized. Thanks to a variety of exercises, a lively and at the same time relaxing workout is possible that promotes flexibility, strength and coordination in equal measure.

Not only in terms of hardware, the TOGU community can look forward to updates, also in the digital field, the Bavarian company presents a novelty: the TOGU Club.
Users can register for free at www.togu.de/club and thus gain access to training tutorials. Regularly new fitness circles are added. All exercises are feasible with and without a device. Intensity and effectiveness can be increased by the TOGU training equipment. Free tips from experts on the subject of exercise and health (including Gabi Fastner) are included. In addition, TOGU Club members benefit from many other benefits. Registrations are possible from mid-April, more information will follow.

Innovation and creativity have been the main assets of the company since the TOGU foundation in 1956, based in Prien am Chiemsee. At that time, the brothers Toni and Gust Obermaier received an international inventor prize for the realization of a simple and ingenious idea: to make a ball out of a single piece. After some fiddling, they fabricated the world’s first ball without seams in a saucepan on the kitchen stove of their parent’s farm and eliminated a previously unavoidable vulnerability. The brothers combined the first letters of their first names and founded the small company TOGU. More than 60 years, numerous registered patents and even more products later, it is still today the pursuit of new ideas that characterizes TOGU with its more than 100 employees. The TOGU product range includes playing and sports balls as well as air-filled medical, training and therapy equipment.