Running with Brasil – a self-experiment 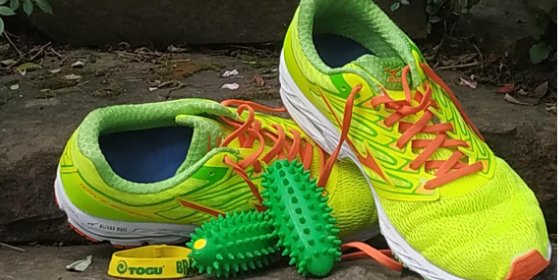 Since TOGU recommends the Brasil as running equipment for building up the muscles of the arm and trunk muscles, I thought I would test it on my little house round. No sooner said than done, laced up my running shoes, took the Brasil with me and off I went.

At first it was a little unusual to hold something in my hand while running, but with every meter I ran I got more and more used to the Brasil. My first fears that the pimples would drill into my hand turned out to be unfounded, in fact it felt comfortable and soft. I had the subjective impression that the blood circulation in my hands improved compared to the “normal” hand position. I also did not find the additional weight of about 200 grams disturbing.

What are the effects of running with Brasil?

My sons, both active triathletes, always criticize my running style because of the fact that I hardly ever use my arms. To achieve the “shaking effect” of the granules, I simply had to use my arms more.  After about three kilometers I felt that my arm muscles, especially the biceps, needed to work more. Before the run I adjusted to the fact that the pulse would probably increase a bit due to the Brasil, but this was not the case, the pulse was surprisingly at the same level. Strangely enough, the run felt lighter and more fluid, apparently the increased use of the arms paid off. After the run I felt a slightly increased muscle tension in the area of the chest muscles, the neck muscles as well as the shoulder muscles. So it seems to be true that the Brasil strengthens the arm and trunk muscles.

I don’t know about you, I feel a new strain or a new training stimulus at the earliest one day after training. That’s how it was this time, the day after I had a slight muscle ache in my upper back muscles, especially in the area of the rhomboid muscle major, which seems to be especially addressed.

Yes, the arm – and torso muscles are strengthened, but what surprised me much more is the improvement of the running style especially the use of the arms. As described above, the Brasils give a movement feedback which, at least for me, has positive effects on my running style. I will certainly not do every running session with the Brasils, nor will I run 10 kilometers with them. But on short sessions you can confidently include them in your training from time to time. I also think the Brasil are very suitable for improvement in the context of a running style training for ambitious runners.